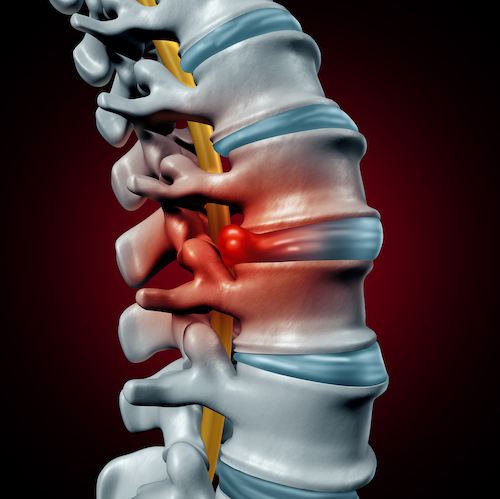 Discs are rubbery structures located between vertebrae of the spine, where they absorb shock and assist with movement. Discs weaken over time, and weakened discs may shift from their normal position – a condition called a bulging disc.

Initially, there may be little or no pain associated with a bulging disc, unless the protruding portion of the disc impinges on nearby nerves. But, if the gel-like inner portion of the disc leaks out through a crack in its outer casing – a condition known as a herniated disc – pain is often the result. Without proper medical attention, a bulging disc may become a herniated one.

The lower back is prone to symptoms associated with a bulging disc, since it supports all the upper body’s weight. In fact, more than 90 percent of all herniated discs occur in the lower back, according to the National Center for Biotechnology Information.

Muscle spasms in the lower back are a common symptom of a herniated disc (also called a ruptured disc). Spasms can also occur in the legs, feet and buttocks.

Chest or stomach pain may also be associated with a bulging disc. In these cases, it’s especially important to seek immediate medical attention, since the same symptoms may also indicate a heart attack.

A bulging disc in the upper spine may trigger tingling in the shoulders, arms, hands and fingers. A worst-case scenario may include damage to the spinal cord, resulting in a heaviness in the legs and a loss of motor skills.

After a medical professional identifies the presence of a bulging disc and its cause – for example, whether it was due to general wear and tear, trauma or another medical condition such as osteoporosis – then a treatment plan will be developed.

Conservative, noninvasive treatment options are generally the first choice to alleviate symptoms associated with a bulging or herniated disc, including:

If a patient’s symptoms are not alleviated by the above, a discectomy (to remove the portion of the disc impinging on a spinal nerve) may be performed – and a minimally invasive option (microdiscectomy) is available that involves a smaller incision, less trauma to surrounding tissue, less pain, and a faster recovery period. In some cases, the entire disc may need to be removed.

Following surgery and after the patient has resumed moderate activity, your doctor may suggest low-impact exercises such as yoga, swimming, walking and strength training to build muscle around the affected area.

If you’re experiencing pain associated with a bulging disc, see a health professional to secure an early diagnosis. An early diagnosis is the first step toward treating disc pain and to keep from exacerbating the condition.

sContact the back-pain experts at Delaware Back Pain & Sports Rehabilitation Centers to find out how they can help. Use the convenient online form to request an appointment or, with a total of seven offices in Newark, Wilmington, Middletown, Smyrna, and Dover, Delaware, just call the location nearest you.